History and images of castle and fortified town

I have lived in the English Midlands town of Bridgnorth for 40 years. The town settles on both banks of the River Severn valley, south of Ironbridge and, although not mentioned in the Doomsday Book at all, has been a relatively important Shropshire town ever since.  This included a spell as a major inland port when this part of the Severn was navigable in both directions.

I regularly walk through the Castle Gardens in the centre, and these are dominated by the remains of a Norman castle keep tower some 22 m tall. Remains is an accurate description, for all that does remain is almost the whole of the north elevation, a third of the west, a small part of the south and nothing of the east. Exceptionally, the tower leans, unsupported other than by the natural ground, at an angle of 15 degrees which is four times that of the (concrete supported) Leaning Tower of Pisa.

Unfortunately, very little of the greater castle remains to us today. This state of affairs is far from being unique across England e.g. Bristol Castle, once one of top five major Royal castles i 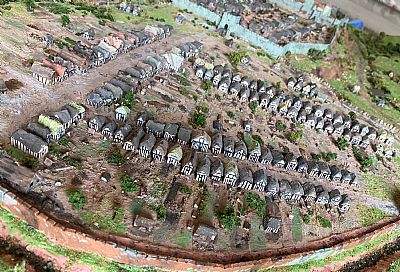 n England with a keep substantially bigger than Bridgnorth, and now, virtually vanished.  But, almost uniquely across England, (unlike Bristol) there exists not one written description or drawing of the castle before its demolition in 1647. Prior to then there are various written references to small details, but these are more often than not ambiguous. A comparable situation applies to the town.

Despite the scarcity of provable facts, I am in the process of drafting a book about the castle. To supplement the book, and to exist as stand-alone exhibits, I have produced two scale models. One is a small-scale replica of the castle and fortified town as it may have existed in 1275. The second, larger scale model represents a part of the castle during the siege of 1646. With such a scarcity of facts, book, I have had to instead look at trends and evidence from other castles and towns to piece together a reasonable postulation. No one castle nor town was used. For instance, castles such as Bridgnorth built before 1200 rarely had wall towers, a characteristic of the ‘classic’ castle of popular imagination. With house in the town, we know that 1275 county town houses were almost all simple affairs of wood and thatch, though none have survived.

The two models now reside permanently in the town museum.

This website aims to bring these models to a wider audience as well to function as a depository for other information about Bridgnorth’s history before 1700, including extracts from the book.

Individual web pages look at how the castle and medieval town may have appeared, from the castle's construction at the very start of the 1100s through to 1646, the time just before its demolition ordered by Parliament following its military role during the English Civil War. 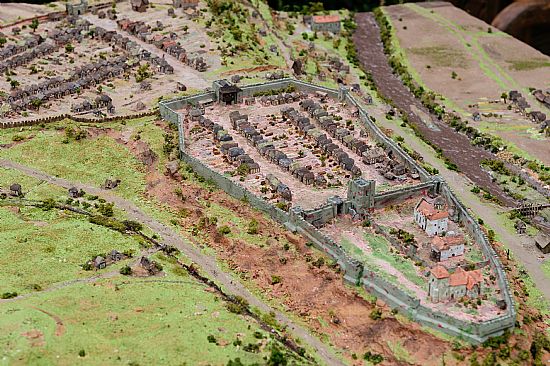 This photograph is copyright Shropshire Star. All others are by the site author, Gerry West.